Back at the end of November last year I was contacted by my client Receipt Bank and asked to look over a location-based advertising photography brief they needed shooting.
To give you a brief overview Receipt Bank produce an app that allows business owners to easily scan their receipts avoiding spending valuable time manually entering them into spreadsheets.
The brief was simply to capture three business owners at their places of work with the final images being printed on the walls in Receipt Bank’s London offices and potentially other media.

Having worked for many years with the Creative Director Stuart shooting Cars, Lifestyle and other Corporate work it’s fair to say we have a good understanding of one another.
This was one of the reasons the brief was pretty loose and we could adapt things slightly on the day as we felt fit.
This is not a bad thing when shooting on location which can often be a little unpredictable compared to the sanctuary of a studio but also because due to tight schedules we were unable to scout the locations personally beforehand.

All the locations were based around the Chichester area of Sussex which logistically made sense as we were looking to capture everything in one day.
The first stop was Rowdens Chartered Accountants where we were to Photograph Penny one of the directors of the company.

Lighting smallish areas with low ceilings like an office can be tricky especially if you’re a fussy bugger like myself!
Luckily Stuart knows this and allowed me time to adjust the lighting until I was happy.
My approach to lighting, especially in these situations, is to keep it simple and persevere.


The actual shoot was completed within around 10 minutes.
I don’t wish to keep people on set any longer than needed especially if capturing corporate work when people are sparing time in a busy schedule.
Another reason to work swiftly is sometimes I will get a person who is not fully comfortable in front of the camera which I add was not the case with Penny or anyone else we captured on the day. 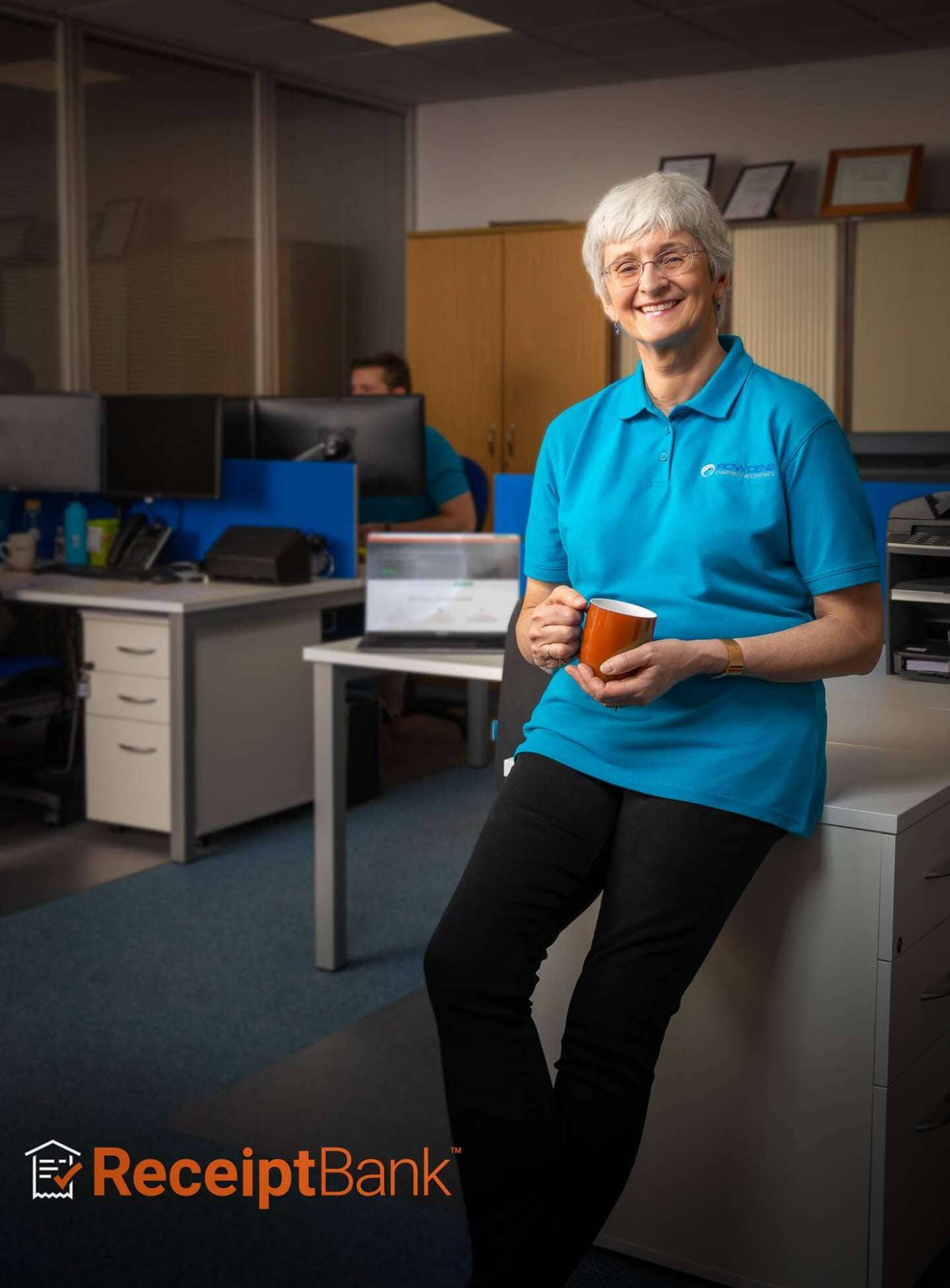 The second location was at MJO Forestry Limited where we met proprietor Marc Odin and his wife.

MJO is a family run business who manage local West Sussex woodlands.
We decided to initially photograph Marc in the woods with one of his state of the art machines and this worked well.
However, upon returning to MJO’s yard we noticed an old rather dark wooden building which turned out to be the sawmill.
Both Stuart and I immediately decided this was too good a location not to shoot and this ultimately became out the second image.

This is another reason to remain flexible on Advertising / Commercial photoshoots as you never know when something better offers itself up.

Our final shoot of the day was at Whitby’s who were another family-run business.
Whitby’s specialise in photographic printing and camera sales and we were going to have to shoot while their compact fully decked shop was open for business.

It was this point that I was glad that I had kept to my approach earlier of keeping the lighting simple as there so was no way I was going to be able to set up multiple lights here especially while the shop was open to customers.
We waited for a short time for a lull in footfall into the shop (they were pretty busy!) and we captured the images but not before Mark the owner closed a sale to Stuart for a camera for his kids!

Mark the proprietor was a real character and once again my job for the day was made very simple and fully enjoyable to complete. 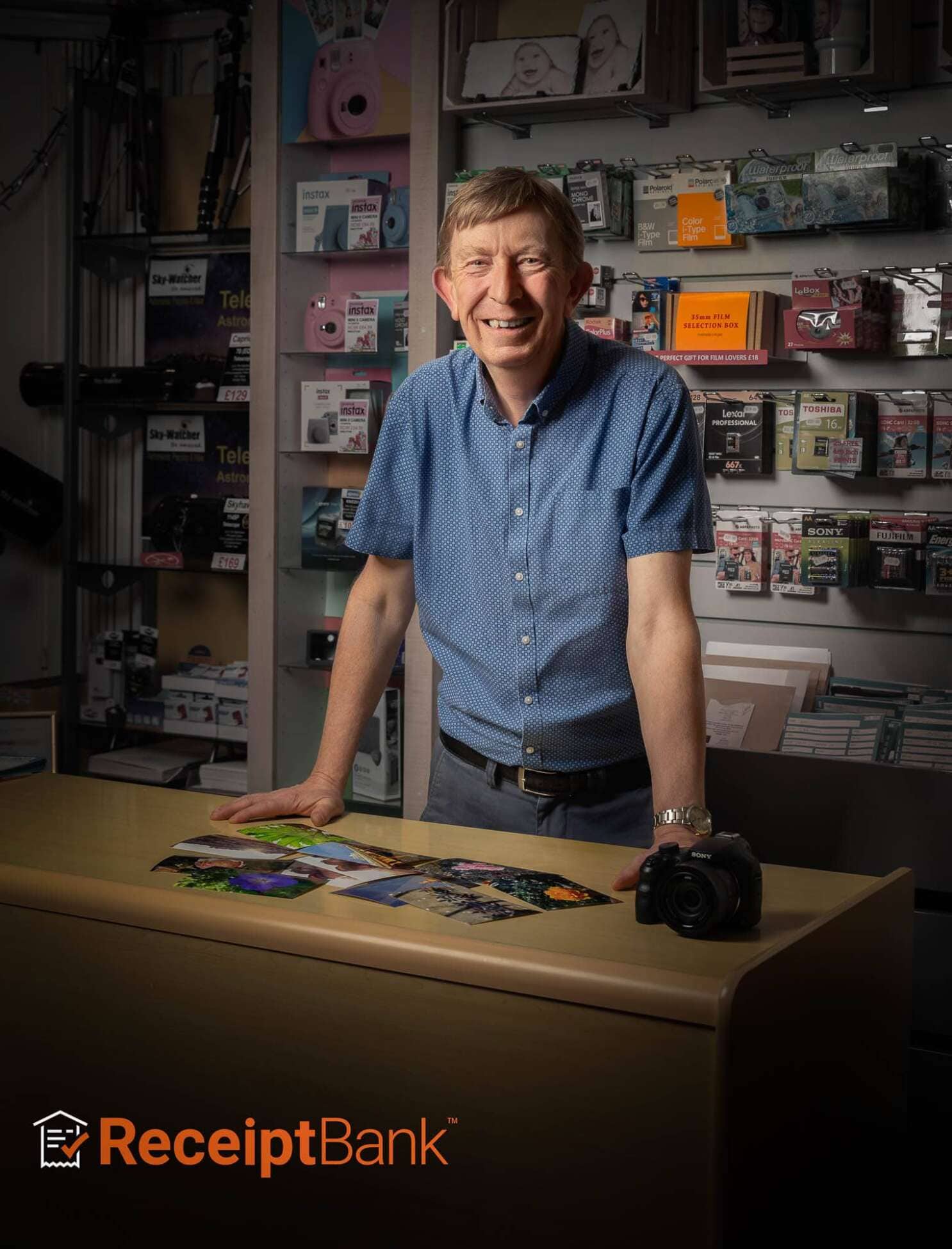 Post-production was very straight forward although I did decide to very subtly re-colour some items in each image to match Receipt Banks brand colour of Orange.

I also decided to create a 2.5d Parallax video from one of the frames I captured of Marc in the Mill which can be found below.