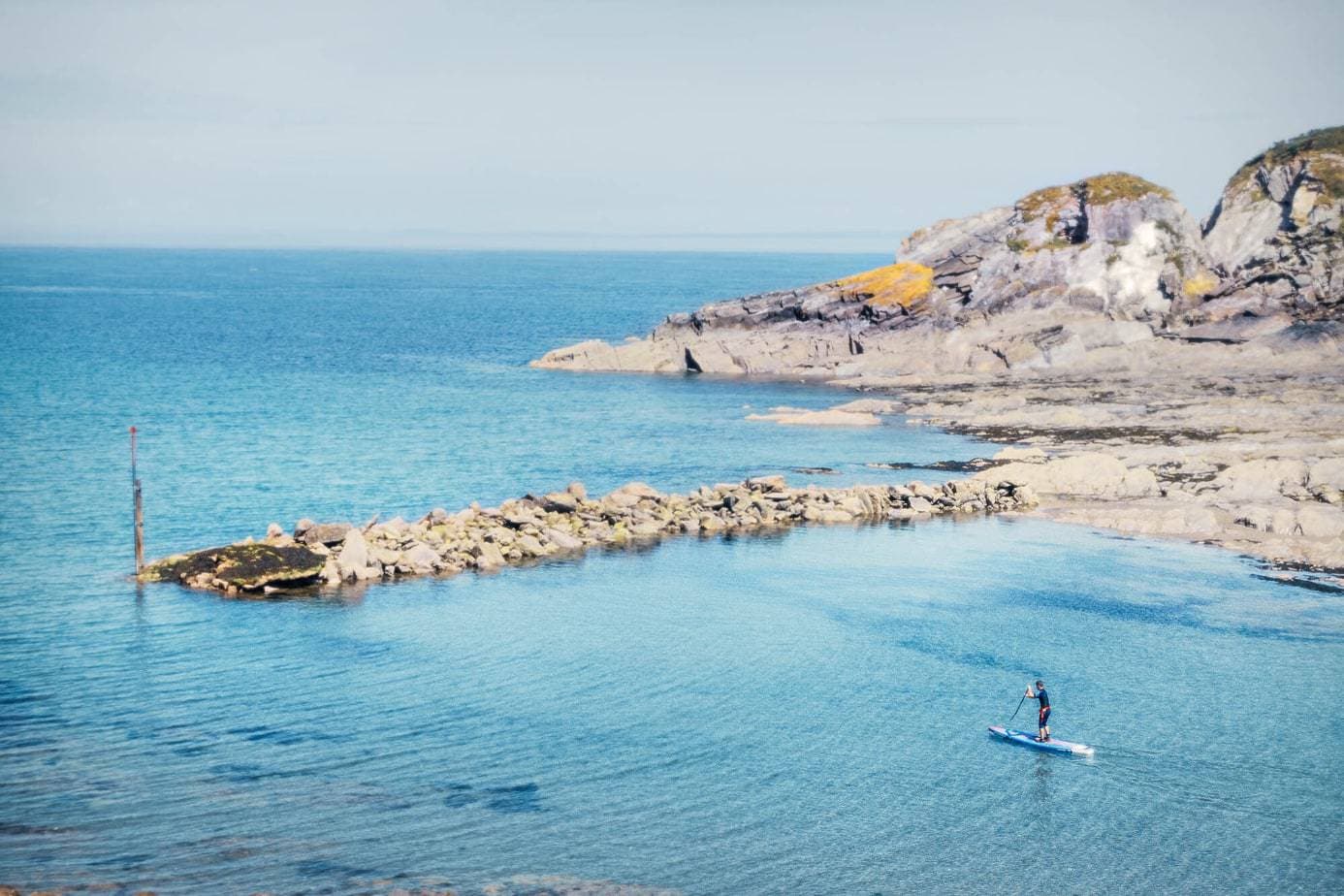 We have had some fantastic summer light this last few weeks and I just had to take advantage of it to capture some aerial images and video and experiment a little.
In a few weeks, I’m heading to one of if not my favourite place on earth Rhodes in Greece.
Greek history & myths have been a passion of mine passed on from my dad since a child and the reason I became a photographer but that’s another slightly strange story.
Over the years I’ve travelled to many of the sites both on mainland Greece, the islands and also Turkey too but Rhodes has always been my favourite.
This trip I have several locations I wish to photograph and film and I plan to do this with the drone.
So I’ve been busy checking my aviation maps for any airspace restrictions for my proposed locations and planning the timings for the best light.
Not one to ever be satisfied I’ve been looking at extracting extra resolution from the drone’s already impressive camera hence the experimenting.
The latest image is of Burrow Hill in Somerset which I’ve shot many times but never from the air.
My experiment to extract extra resolution and quality from the drone was a success and one I’m going to use again where appropriate. 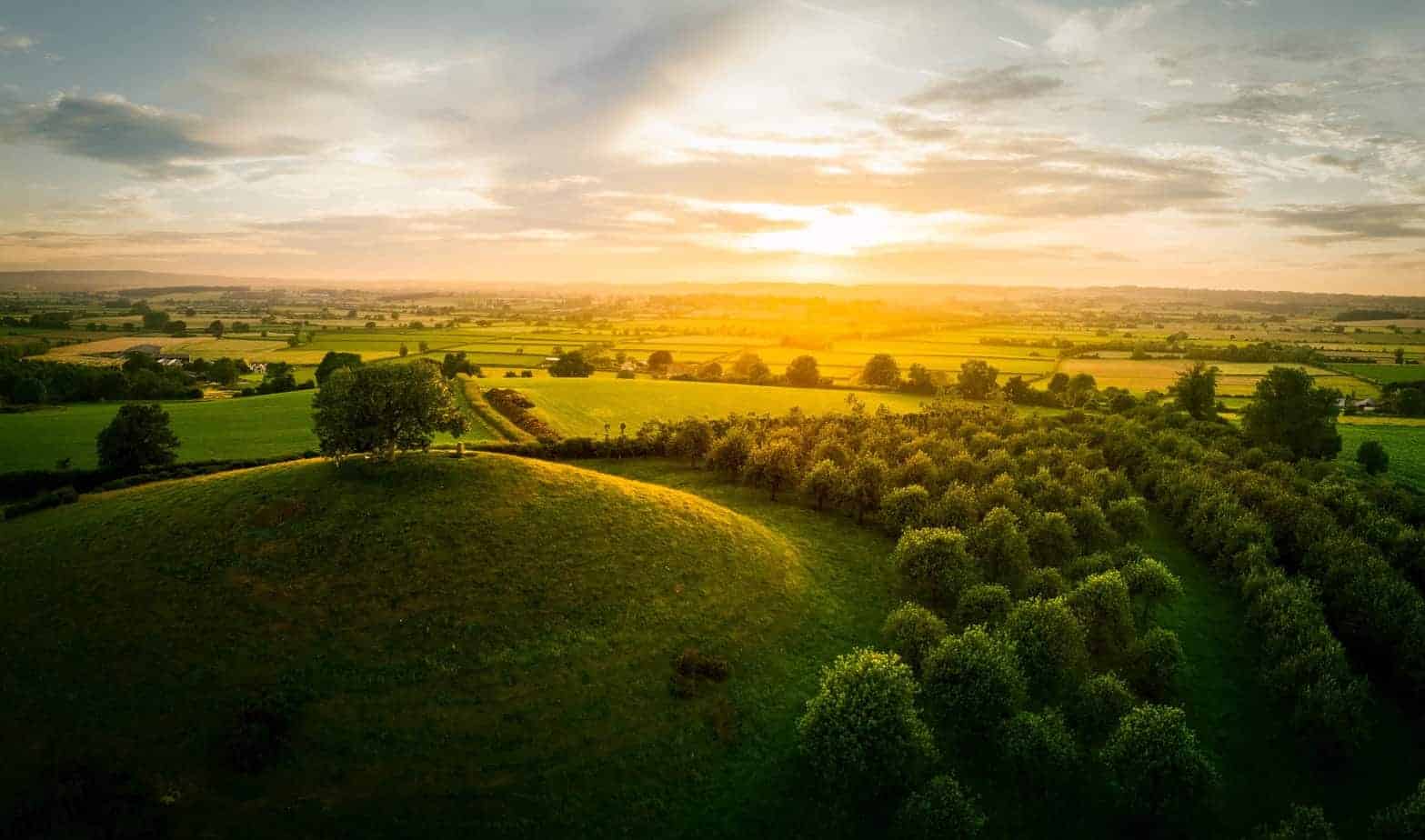 Sometimes I have an idea and before I know it I’ve captured all the images required and I’m sat in front of the computer bringing it to life.
Others, however, can sometimes sit around in my head for months or at best sketched out in Photoshop, this image is a little of both those.
As a Somerset Photographer over the years, I have been capturing people and animals for a personal project “Life In A Somerset Landscape“.
It had been a while since I had added to the work and I really wanted to capture Burrow Hill which is a situated close to Hambridge in South Somerset for part of the project.
I remember seeing Burrow Hill for the first time one summer’s day, a quaint small hill with a single tree on top complete with an idyllic rustic swing attached to one of its branches.
It felt slightly surreal like I had stepped into a Jack & Jill Ladybird book!

END_OF_DOCUMENT_TOKEN_TO_BE_REPLACED

September is probably one of my favourite months especially with a camera in my hand.rnAfter the long days and often harsh light that summer (sometimes) gives us together with a blanket of green September comes along and brings back a little colour contrast to the landscape with better lower angled light.rnThe other reason I love September is the fields full Maize which for some reason I just have to capture every year. 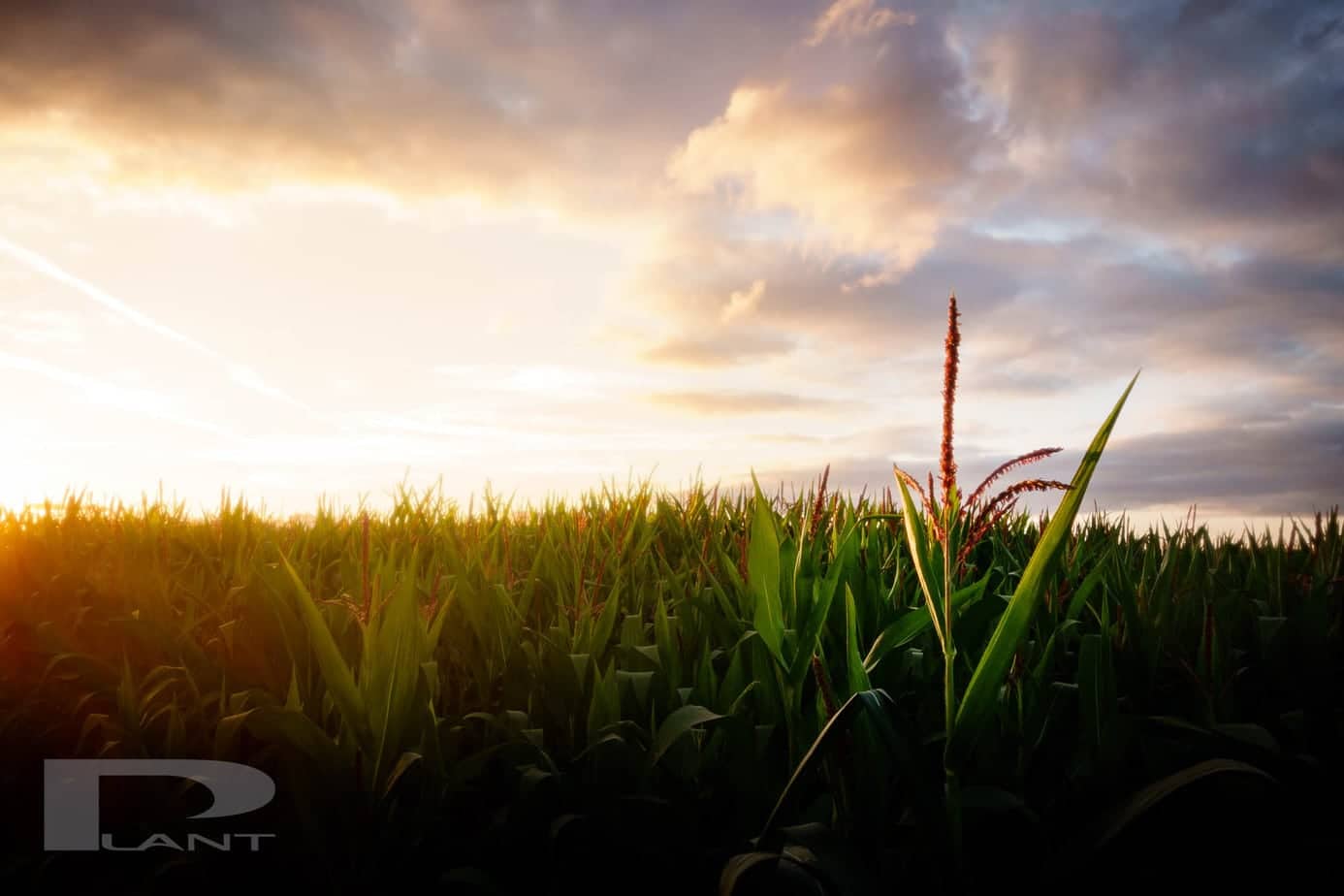 Edge Of Darkness On The White Isle

I’m sat here watching a re-run of Kevin and Perry Go Large and it got me thinking of my trip to the white isle of Ibiza a few years ago.
This image was captured during the very last moments of daylight (or as I call the edge of darkness)
on a beautiful October day.
The fading daylight balanced with the welcoming interior warmth of the little cafe on the beach and sums up the tranquillity of the place perfectly as I experienced it.

Slice of life, A brief photography trip to Porto Cristo

Slice of life, A brief photography trip to Porto Cristo

Last Day Porto Cristo is an image I captured on a brief photography trip while in Majorca one October.
It was the last day of the holiday season for the island and most of the tourist areas were already closed up ready for the winter which is always slightly depressing to see.

I had decided to take a quick photography trip to visit the small coastal town of Porto Cristo to try and capture some “local life” at the town’s beautiful small beach in the late October light.

It did not take me long to work out my viewpoint which included the amazing cliffs and houses that reminded me more of the Italian or French Riviera than of Spain.

A short while elapsed when my slice of local life came in the form of a small fishing boat which left the rustic jetty to venture out to open sea and my image was complete.

As well as being an advertising photographer I also offer high-end photo retouching services.

This means even when not working on an assignment I will often challenge to myself that even on a family holiday I return with at least one killer image that represents the place and my experience of it.
There was a time in my younger years where I would never relax when away and I’d be running around every day at dawn and dusk shooting like a man possessed.
Over the years my way of working has changed (to the relief of the wife) and I often feel the need of a more challenging and unique way of creating that requires a little more of a planned approach. 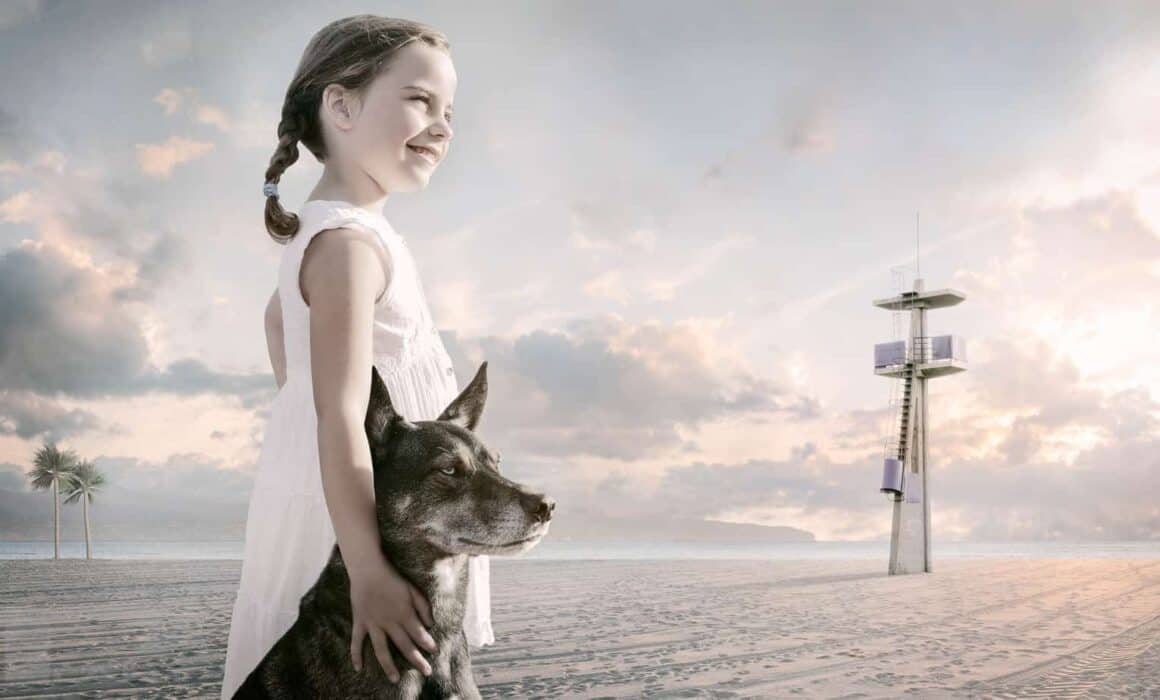 This image (well some of it) was shot on the Costa Del Sol in Spain during one such family holiday. I had been out with my camera a few times during the week but mainly scouting for inspiration for the killer image.
Was struck me about the area was the amount of people out at both morning and night walking their dogs, running, cycling or on rollerblades simply enjoying the beautiful coast and its climate.
The coast was dotted with these striking looking lifeguard towers and clusters of exotic looking Palm trees along the beach that provided shade and a perch for the large colony of Parakeets.
Inspiration was gained and I decided I would venture out at daybreak later that week and capture some of these elements and create the image below titled Contentment.
The model is my youngest and cheapest child to bribe for a shoot Ava with my neighbours very photogenic dog Barney who were both captured upon my return home.

The Bristol Channel can be a treacherous place.
For starters it has the second-highest tidal range in the world, the first is the Bay of Fundy in Canada.
So if that does not catch you out then there is the mud to contend with which claims many a tourist’s cars during the summer months.

I’ve lived along this coast for a large part of my life so I know to give it a lot of respect.
So it was partly this that intrigued me about the Mud Horse Fishermen who go onto the dangerous mudflats to retrieve fish from their nets.

They can only do this as they know the area and tides very well and also have their sledges known as Wooden Horses that keep them from sinking waist deep or more into the concrete like mud.
I had 20 years previous captured an environmental portrait of another of the fishermen but now only 2 survive and I decided to call Adrian Sellick to see if I might be able to capture him for my project Life In A Somerset Landscape
A time was arranged and I met up with Adrian a week later and also his father Brendan who was busy mending nets just a stone’s throw from the beach.

To my amazement, Adrian said he would drive us part of the mile or so out to where his Horse was anchored in his small 4×4 and I have to say I was pretty nervous about that after seeing so many vehicles devoured!
Thankfully I had nothing to worry about and with Adrian’s advise I managed to avoid stepping on the wrong type of mud and being swallowed up and got the shots I wanted before the tide turned.
The final image shows Adrian with his Wooden Horse with Hinkley Point Power Station in the background. 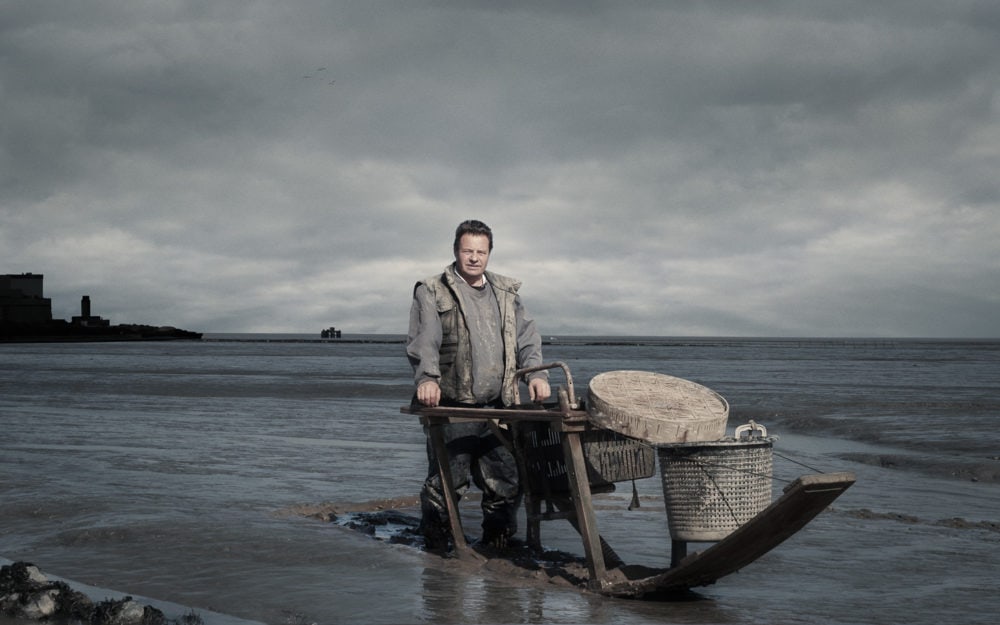 I’ve been selling my images as prints via a few small galleries for 20 odd years.In all that time I’ve never had an image reproduced as big as the one shown here. I was asked if I could supply the image titled “Wooden Walkway” by by neice who wanted to decorate her new home with it.

The image has sold many times both here and in the U.S.A and is probably my best selling image and I doubt it will ever be reproduced quite as large anytime soon. 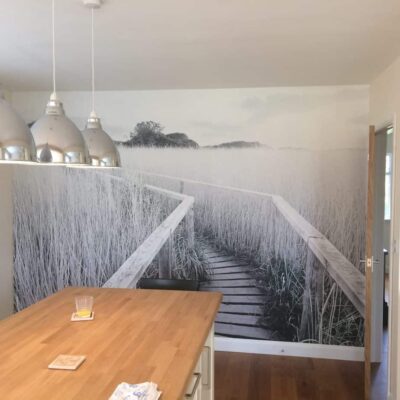 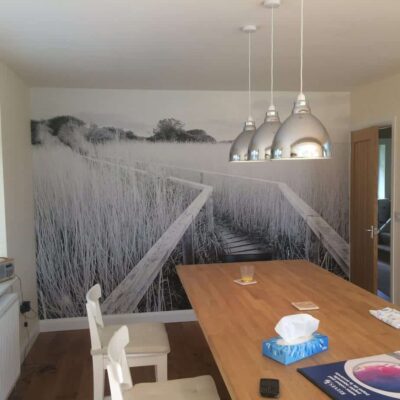