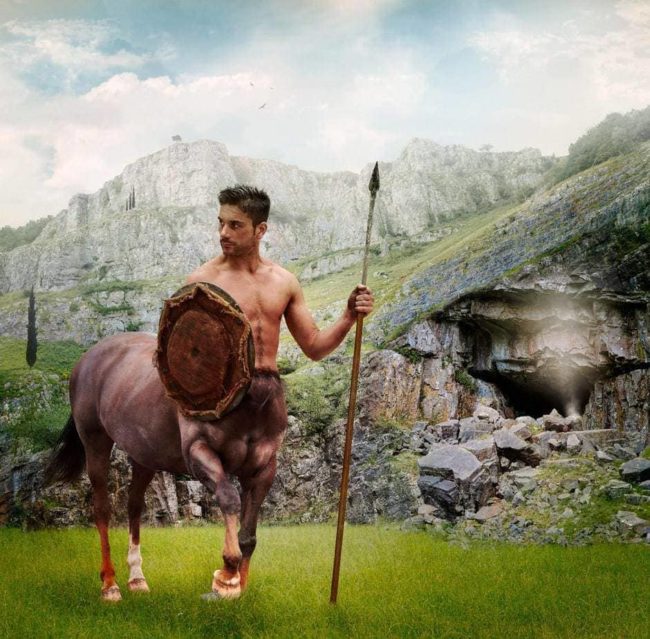 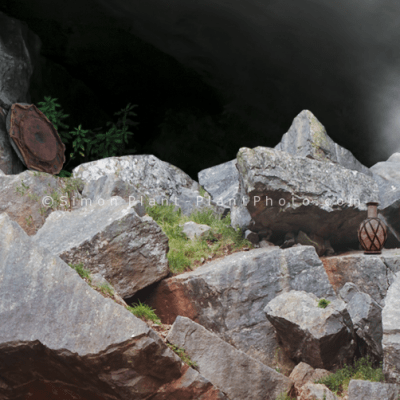 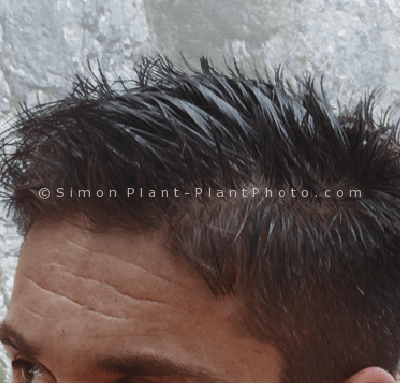 A while ago I was asked by a client if I could shoot some promotional images and video at the Airbus family day in Bristol.Although only open to Airbus employees and their families the event is huge and hosts a variety of great aircrafts.I love planes probably because they generally take you somewhere nice 🙂 and not being one to miss an opportunity to add some shots to my compositing archive to save for a rainy day I shot till I could shoot no more.Having some unexpected spare time this week I decided to trawl through my archives and create the image posted here titled “Graceful Killers”.At the time of writing I’m still researching with help from some kind fellow photographers on Pro Imaging to what these WW1 fighter planes actually are, of course if you know feel free to post below. 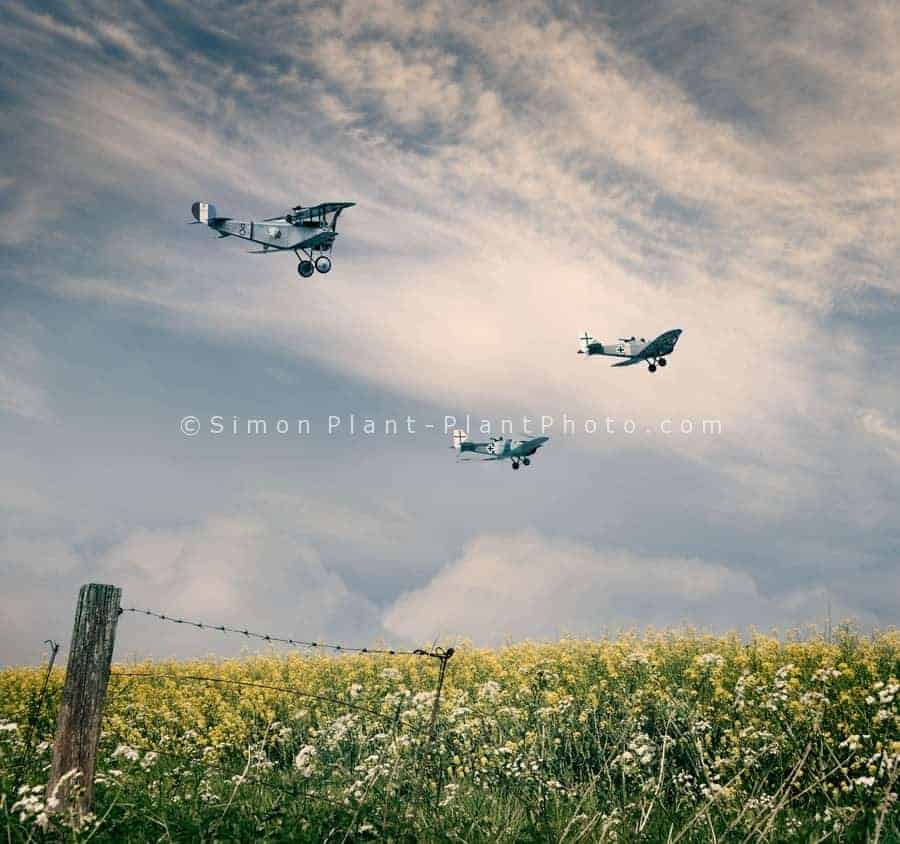 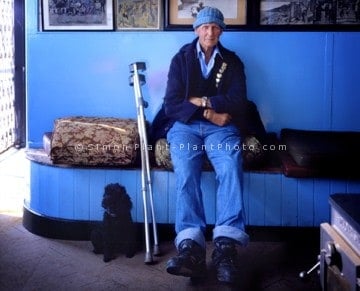 A new year brings a time to look at your work/life and where you want to be heading.However It was in fact last June while while in Turkey that I decided it was time to start shooting more people/life images.I’d found myself shooting very little life based images over the last couple of years and capturing the landscape alone was no logger challenging me enough and I was getting creatively a little stale.I also needed to produce a new book (Portfolio) for the coming year so new work was needed.

I started my Professional career shooting lifestyle images of models for Clarks Shoes so shooting people whether models,celebrities or cornish fishermen (that’s another blog post !) have always featured in my body of work somewhere and something I enjoyed and felt very comfortable doing.So last week I started to make calls to various people in the South West from semi pro cyclists to fossil hunters and introducing myself and my work and simply asking if I may photograph them.So far he response has been very good and images from my recently completed shoots will be posted here shortly.

In the meantime here is an image that I have just completed to add to my personal project “Life In A Somerset Landscape” The project features animals in well known Somerset Landscapes and has challenged me both as photographer and retoucher with this particular image taking approx 4 days to complete in post production alone.

The Fox was photographed at Secret World Wildlife Rescue near where I grew up in West Huntspill Somerset. The lovely people at Secret World where very helpful and kindly allowed me to get up close and personal with their rescued foxes and I got some great images despite falling up to my knee in a hole full of ditch water !For the techies the layered photoshop image was a bit of a monster at well over 1 Gb in size and consisted of 30 layers which is not uncommon for some of my images.The location in the image is Burrow Mump located on the Somerset Levels and the image is as yet unnamed so if you can think of a great title I’d love you to post your idea in the comments below.

Not many pictures I capture escape through my workflow without entering Photoshop for some (quite often extensive) post production work.I have always manipulated my work even before Digital Imaging became available I would spend a week at a time in the darkroom manipulating cibachrome prints.Having said all that I never retouch an image for the sake of it but I do see it as a natural extension to my photographic vision same as was years ago in the darkroom.The image shown here is one (of several) I captured from a recent trip to Menorca Spain which had very little retouching applied to it. On this particular image all that was required was to adjust tone and a few tricks to bring out some of the wonderful but hidden colours that where evident in the rocks. 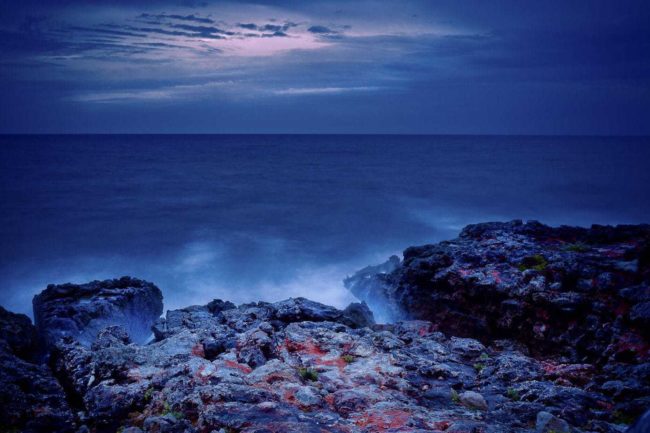 It’s not uncommon for me to shoot images and leave them for a short while before deciding to retouch them.I’m not sure why I do this and it does not happen with all the images I shoot and certainly not with my clients images ! END_OF_DOCUMENT_TOKEN_TO_BE_REPLACED

Today I finally applied the last finishing touches to my latest image creation Praha “44”
I’ve been working on some new ideas for my book (Portfolio) and decided to produce an image that inspired me several years ago.

In 2006 I went to Prague to shoot some images and 360 HDR Spheres for some CGI images of Trucks that I was collbortating on with CGI Artist Andrew Jackson.

One morning while there I found myself wandering the streets in the dark (Pre Dawn) around the Charles Bridge shooting some of the beautiful buildings and cobbled streets.
While studying the scene below (steps leading down from the bridge) in the slighly damp eerie dark of that particular November morning I could easily envisage a scene from the occupied era of Prague in front of me.
I decided it could at some point make a great backdrop to a composit image complete with a German Officer.

I’m extremely pleased with the final image and it could not be any closer to my original vision all those years ago.

As with all composit images planning was the formula to the final sucess. 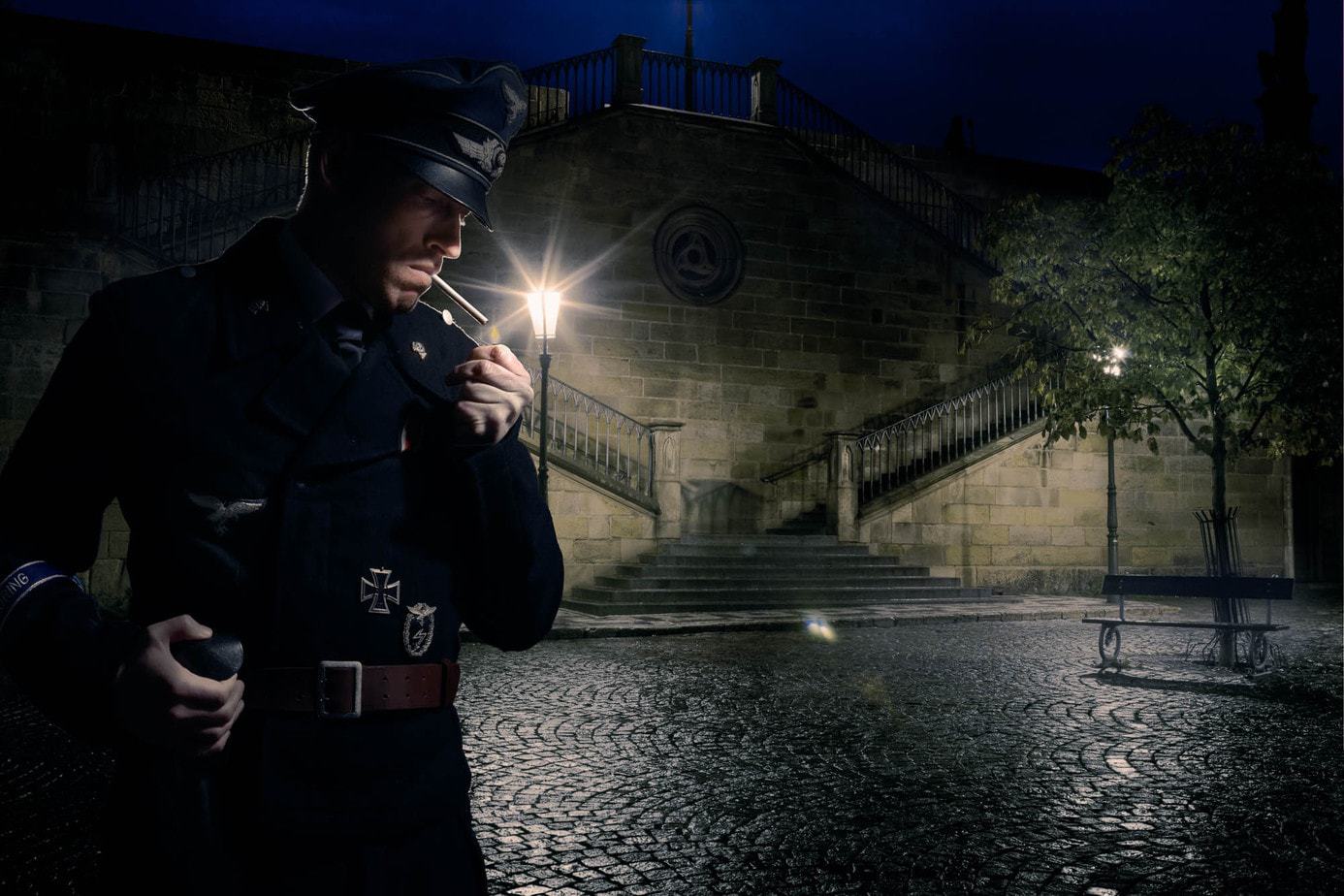 The Lighting setup was pretty simple in terms of equipment used but needed lots of attention to get the look to fit in with the background street lighting while also allowing enough detail in the very dark fabric of the German Officers uniform.

The Last Sacrifice Of Dienekies

Inspired by my love of Greek history, myths and legends this image is another self indulgant project and produced into a Digital Photography Training Video.

Shot on location in Rhodes,Dorset And Bristol !

One of the occasions where post production can be used to help solve the problem of getting the otherwise impossible shot ! 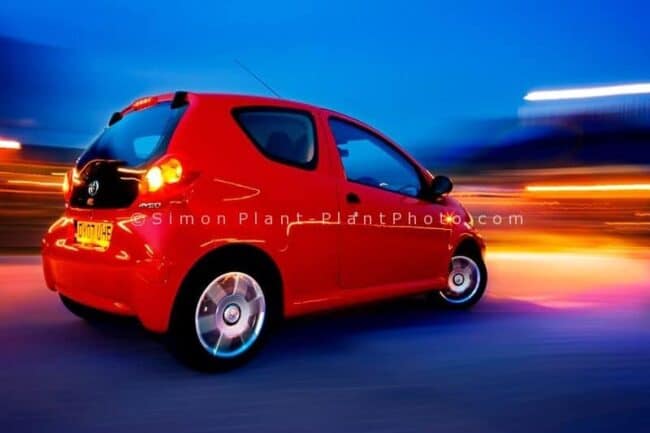 I travel to Turkey quite a lot and I’m fortunate to have a home there from which to explore the many areas of historical interest and is a fabulous photography location.

On this particular trip, I left my friends to enjoy an evening meal together and borrowed my Turkish friend’s car to travel & capture the Windmills in the beautiful evening light.The Windmills are located on a headland high above the bays of Gumbet and Bodrum and give a wonderful view over the sea and mountains. I’d been told about this location many times by Turkish friends but unfortunately, on arrival, I found it a little disappointing compared to the vision that I had built up in my mind.

I decided that seeing I was not being commissioned to capture scenery photography and to shoot a faithful representation of the place that I would stay true to my own vision (as I often do) of this beautiful location by moving a few elements around and clean the place up a little with some highend retouching.

My main disappointment at the location was the fact that the stunning view behind the windmills was not clearly visible so I decided to rectify this by raising the sea & mountains.This was accomplished by capturing the precise images I needed than in post cleaning out a couple of the more derelict windmills so that the view could be seen behind.This image was also made into an image retouching training Video called “Moving Mountains”

Turkey 2009 Images for Prophotoinsights Video Training, View from Peninsular between Gumbet & Bodrum where windmills are located.