Yeah awful title but it kind of describes what is going on in this image.Last September I got a call from an agency called Ice House Design whom I had worked with on a very successful campaign the previous year which won Silver in The Graphis Advertising Awards.The brief was to capture images for a composite they wanted me to create which was to include a Stag as the main element.With the brief in hand I started to look at my options for capturing the animal. After several calls and networking I found Mike Gage of South West Deer Rescue Centre.To cut a long story short the shoot was a success and I’ll post the images once the campaign goes live.Mike was a great character and I asked if I could return at a later date to shoot him for my personal project “Life In A Somerset Landscape” and this brings us to the image below.My plan was to shoot him and his mate Pete sat on the rear of their beaten up 4×4 truck surrounded by Deer but the truck was out of action with a broken axle.So as often is the case in the unpredictable world of location shooting I had to think on my feet and come up with an alternative idea. We decided that a shot of the Deer being fed their favorite Rich Tea biscuits could provide the perfect image against the beautiful South Somerset backdrop. 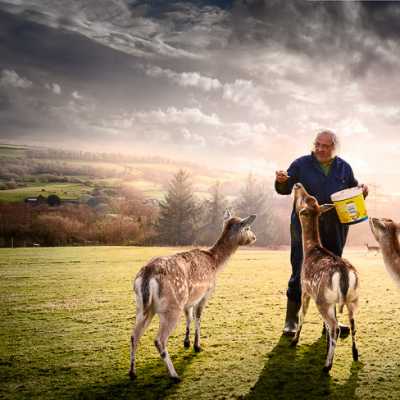