Sometimes I have an idea and before I know it I’ve captured all the images required and I’m sat in front of the computer bringing it to life.
Others, however, can sometimes sit around in my head for months or at best sketched out in Photoshop, this image is a little of both those.
As a Somerset Photographer over the years, I have been capturing people and animals for a personal project “Life In A Somerset Landscape“.
It had been a while since I had added to the work and I really wanted to capture Burrow Hill which is a situated close to Hambridge in South Somerset for part of the project.
I remember seeing Burrow Hill for the first time one summer’s day, a quaint small hill with a single tree on top complete with an idyllic rustic swing attached to one of its branches.
It felt slightly surreal like I had stepped into a Jack & Jill Ladybird book!

Burrow Hill and field in the foreground were captured on the same evening but at short distances apart.
The vision for the image I had was I wanted crops in the foreground field which Burrow Hill didn’t have.
I found a field close by and after carefully matching lighting angles and camera height etc I had 70 % of the images I required in the bag.
In a previous image in the project titled The Last Harvest, I had captured an Owl called Breeze and I decided I’d like to have another bird as the focal point for the image.

I was originally thinking of photographing a Buzzard but after a chat with local Bird of prey expert Sharandy’s Birds Of Prey she mentioned a Tawny Owl called Bracken who sounded perfect for the image.
Whenever photographing people I like to be prepared and work quickly and this is equally important with animals.
With this in mind, I planned my camera position & lighting well it advance (as much as I could) as Bracken needed to be illuminated similar to the landscape image and at the correct height etc to blend into the image convincingly.
On the day all started well the weather was being kind and Bracken was the perfect model then an issue became apparent.
The single clip light (to replicate the sun) wasn’t firing despite having power.
On top of this I was aware the shaded area I was and needed to be shooting was disappearing meaning I’d need to move the set if I took too long and unsettle my perfect and very patient model.
I needed to make a decision pretty quickly.
The choices where A, either stop the shoot and fumble around trying to work out why the light wasn’t firing, B, change to another lighting set up which again would take several minutes of precious time or simply keep shooting getting great images while Bracken was content.
I decided to keep shooting and the reason was that overall the light was fine to capture the images I needed plus I knew although not my first choice I could fake the rim light in post-production that was needed to help blend Bracken into the scene.

Final Image This is a great example of a conversation I often have which is that Photoshop is an amazing tool, mastering it not only gives endless creative possibilities but can also help problem solve when things don’t go as perfectly as you had planned! 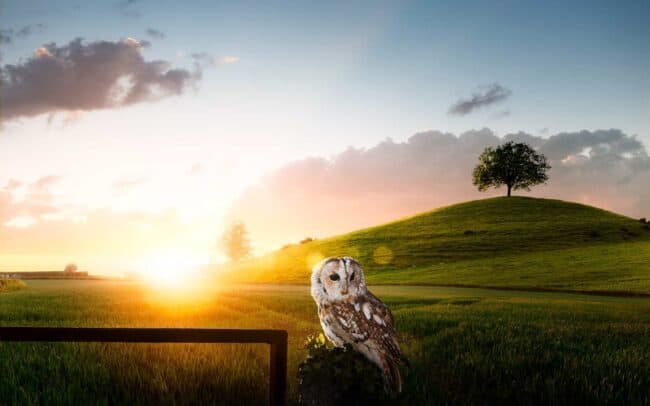