My quest to shoot more people images took me to my other life long passion of football with some ideas that had been simmering in my head for a while.As a follower of Yeovil Town F.C (and photographer for The Yeovil Town Community Sport Trust) I decided to produce a shoot with a couple of suitable models against an appropriate stadium backdrop.As my photography vision/style of work is mostly about quiet moments I decided my main images would not be action packed aggressive images of footballers competing but ones that where more about moments & emotions of the game.My first job was to source my models.Having spent many years testing for model agencies in Bristol I still had several contacts to call upon but in the end I was contacted by a couple of models via a post I made online.The Models Chris & Daniel where both medical students who also did modelling part time and where perfect for what I had in mind so a date was set to do the shoot.During the next week I purchased a few items of kit and managed through my stylist to borrow some appropriate shirts and we were all set to go.I had some images on file to use for the stadium backdrops although I did look at purchasing some stock images but as usual I really wanted to shoot or use my own to keep complete control over the image so decided against it.What I knew would be needed to be shot was some floodlit grass to complement my vision of a night time floodlit football stadium.Luckily my son trains twice a week in the Development Centres that Yeovil run and one of the locations had some ideal floodlit grass so I managed to capture what I needed while avoiding the Javelin training that had set up while my back was turned !So with all my background elements collected all that was left was to work out the lighting and capture my models.For this shoot I needed very particular lighting style to give the impression of stadium lighting so I decided my best bet was to set up in my studio at The Monks Yard.Although a fairly simple lighting set up I decided to use our biggest studio space to allow plenty of room to control the precise quality of light I required for the images.Chris & Daniel where very professional and took direction superbly and we soon moved through several variations and close ups.

To create the beads of sweat on the models skin I used a water mister (kind you use to water plants or spray at the wife !) with a drop of Glycerine in it.To finish off the day we decided to do a few action shots on location in the park which gave me some naturally lit images to play with if I decide to do so. 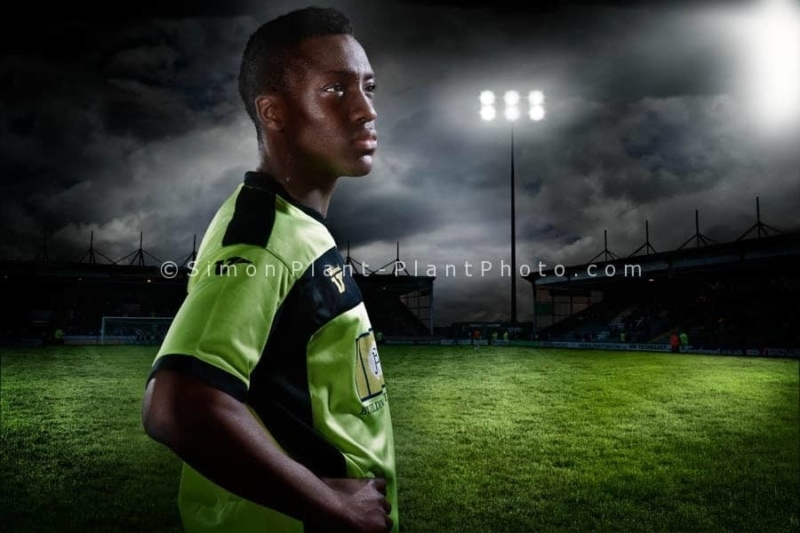